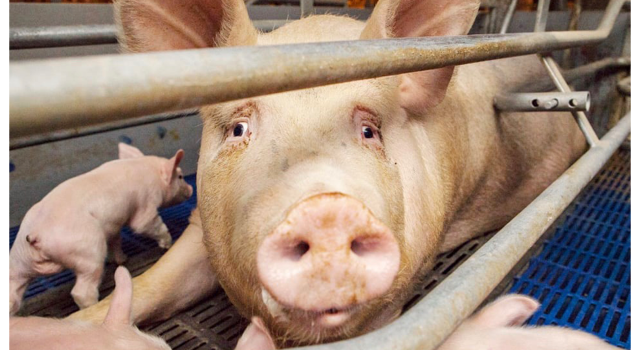 Animal excrement and other waste from large-scale US dairy farms is polluting nearly one-third of the nation’s rivers.

Thousands of wild animals are killed in the US, including bears, coyotes and bison, because they are seen as a threat to ‘farm’ animals.

There is NO reason to support the exploitation and cruelty that is the Kangaroo Killing Industry.
I choose to keep cruelty off my plate.
( Ro Godwin )

The University of California found that 25% of fish tested had plastic in their guts.
This means people who eat fish ingest toxic plastic.

The greatest slaughter of wildlife land animals on our planet.
Every year, Australia kill millions of iconic, native kangaroos.

Animal rights are no more a matter of opinion than is any other moral matter.
( Gary L. Francione )

All ‘religions’ were invented by man.
And both animals and humans suffer from their senseless, barbaric actions.

Animals need a place where nature has not been rearranged by the hand of ignorant, arrogant humans .

It’s unethical to delegate something to be done that you wouldn’t do yourself for ethical reasons.
( Sam Harris )

The Prophet Himself Is Not Known To Have Partaken Cow Meat ..
In his entire lifetime, the Prophet himself is not known to have partaken cow meat.
According to well known Islamic scholars, there is no Hadith available which confirms that the Prophet in fact ate beef.
However, there are a number of authenticated statements of the Prophet, which does confirm that beef, ie cow’s meat (also called bovine meat), contains illness, while the cow’s milk and fat contain cure and healing.
For example, Imam Suyuti in his al-Jami as-Saghir narrates that the Messenger of Allah said, “The milk of the bovine (cow) contains healing, its fat is a medicine, and its meat a cause for sickness.”
Abu al-Qasim Sulaiman ibn Ahmad ibn Al-Tabarani, one of the most important Hadith scholars, referred to the aforementioned Hadith as authentic, and so did Bayhaqi in his Sunan and Hakim in his Mustadrak.
From Fatwa-e-Humayuni to Darul Mukhtiar to Maulana Hassan Nizami and Hakim Ajmal Khan, the message has been reiterated time and again that cow slaughter is not mandated in Islam, that poor Muslims are not obliged to offer sacrifice and that neither the Holy Quran or Arab traditions support cow sacrifice.
There have been many instances related to cow protection during the life and times of Khwaja Gareeb Nawaz Moinuddin Chishti of Ajmer. Hazrat Hamiduddin Nagori of Rajasthan is said to have been a vegetarian all his life and entry to the Dargah after eating meat is explicitly prohibited even today.
What is debatable is the specious argument that beef eating is an integral part of Islamic lifestyle and, therefore, protests against cow slaughter is prejudicial to their freedom of religion and the right to choice of food.
A close perusal of Islamic texts, and views of noted Islamic scholars and clergy worldwide, reveal that, forget any prescription for eating beef, Islam does not prohibit vegetarianism.
In fact, there are well known devout Muslims who practice vegetarianism.
Hazrat Ali Ibn Abi Talib, the cousin and son-in-law of Prophet Muhammad, the fourth Khalifa as per Sunni belief, has been quoted in Sharh Nahjul Balagha, as saying, “Do not make your stomach a graveyard of animals”.

If slaughterhouses had glass walls, everyone would be a vegetarian.
( Sir Paul McCartney )

The morons in suits, who make all the money, employ low-life psychos to slaughter and mutilate the animals.

When we have governments who allow ’farmers’ to treat animals like shit, what chance do the poor souls have?

Other animals stand on the same ground as mankind.
We must learn to share our common earth.
( Anthony Douglas Williams )

Our true moral test, the test that defines how civilised we are and how decent we are, is our attitude towards those who are at our mercy.

We must never stop speaking out for all the poor souls who are abused and persecuted.

Going vegan is no burden.
It is a liberation from being part of the violence and death humans impose on the vulnerable.
( Gary Francione )

Ugly humans have capitalised on the silence of loving, gentle, intelligent animals.

If we held a moment of silence for every victim of the wretched ‘farming’ and ‘meat’ industry, we would be silent for eternity.

Every living creature on earth should expect to live in freedom.
( Anthony Douglas Williams )

The rich and powerful ‘meat industry’ continue to convince the masses that it is ‘normal’ to kill and eat animals.

When it comes to animal abuse and cruelty, the silence from the spineless Governments and leaders of the world is deafening.

We are all precious souls simply living in different bodies.
Only when the ignorant idiots realise this will there be peace on Earth.

The despicable Australian Government export gentle animals to Middle East shit-holes knowing they will suffer horrific torture before having their throats slashed.

Families slaughtered, Kangaroos, Joeys, bludgeoned to death.
They fled in fear, their cries echoed across the country, but you were too busy to hear.
( Ro Godwin )

Humans have invaded the space of animals on this planet.
And then they are killed when they wander where their ancestors used to roam.

Worthless ugly creatures pretending to be humans infest our planet.

The morons who call themselves ‘hunters’ failed in their bid to have Chris Packham fired by the BBC for labelling them ‘The Nasty Brigade’.

Most people have become educated, but many have not yet become human.

The Sick Custom Of Using Bear Paws To Make Soup ..
The sick delicacy supposedly gives the consumer the power and virility of a bear.
But conservationists say the manner in which the paws are harvested shows a stronger element of cowardice than power as the paws are chopped off with a guillotine and the bears are boiled alive.
Bear meat as a delicacy first became popular during China’s Shang dynasty – with its last ruler King Zhou known to enjoy a paw.
Today, bear parts are in huge demand in black markets across Asia, with organs and bile used in medicine to cure anything from sexual impotency to a fever.
Bear paws, which can be turned into home decor products such as ash trays, are most commonly thrown into a soup-like broth.
In May, Chinese officials recovered more than 200 severed bear paws that were allegedly being smuggled in from Russia – a haul worth $460,000 on China’s black market.
The “delicacy” – which according to legend gives the consumer the strength and vigour of a bear – is popular in Asian countries such as China, Vietnam, and Laos – despite it being illegal.
Most bears who are used for the practice begin their lives in captivity – remaining in cages until traders decide to harvest their body parts.
Each paw is hacked off one by one, whilst the poor animal is still alive, and is often done in front of the diner to add an element of showmanship to the whole event.
The front paws are the most expensive as they are seen to be the most tender, and the front left in particular is prized as this is the one that the bear normally licks.
This is thought to further increase the tenderness and flavour of the meat.
Back paws are cheaper because they are tougher from being walked on.
However even though the defenceless animal has had all four of its paws removed, this is only the beginning.
Once the bear has been de-pawed, they are then brutally battered with steel poles until near death – supposedly to ensure the rest of the bear meat is tender.
The bears are then raised above some boiling water or scalding coals, lowered in feet first, and cooked alive.
Now species like the sun bear and Asiatic black bear are coming dangerously close to extinction thanks to hunters looking to profit from their suffering.
( Vickiie Oliphant, 09.08.2016 )

Our unwillingness to see personhood in non-human animals does not diminish their personhood, it diminishes our humanity.

Don’t believe the filthy lies and the ‘humane’ shit spewed by the money-motivated, blood-soaked ‘meat industry’.

If you take their life and eat their flesh, then you have no right to look away.

The US Bureau of Land Management voted to slaughter 45,000 wild horses to safeguard grazing land for cattle raised for ‘beef’.

We may consider ourselves to be intelligent and educated, but all are not yet civilised.
Mindless barbaric savages still infest our planet.

All animals are afraid as they face their deaths, all animals.

Some just see a beast.
I see a precious soul, a friend.

The torture, mutilation, slaughter, rape and violation of non-human animals would be abolished under my administration.
( Clifton Roberts )

More animals suffer abuse from ‘farmers’ than the rest of the world’s population combined.

The holocaust on your plate.
THREE MILLION animals are killed EVERY HOUR for food in the USA alone.

Most people have been brought up to believe it is normal.
But causing suffering should never be considered normal.

‘Humane’ .. The gentle-sounding phrase used to con the masses by morons who call themselves ‘farmers’.

UK Environment Minister Andrea Leadsom wants to repeal the hunting ban and make it legal for perverts to kill foxes for fun.
UK PM Mrs May has agreed to a free vote on bringing back ‘hunting’.
Confirming they are both full ‘bloodied’ Conservatives.

Each and every animal on earth has as much right to be here as you and me.
( Anthony Douglas Williams )

Every living being, all precious souls, deserve the chance to live and love and play.

Eating animals is violence.
Animals belong in our hearts, not our stomachs.

It doesn’t matter if they have paws or hooves.
Don’t hurt them.
Don’t kill them.
Set them free.

Follow your heart, not the cruel eating habits of others.

We are the problem, not the kangaroos.
We are the ones who are over-populating and taking their land.
( Ro Godwin )