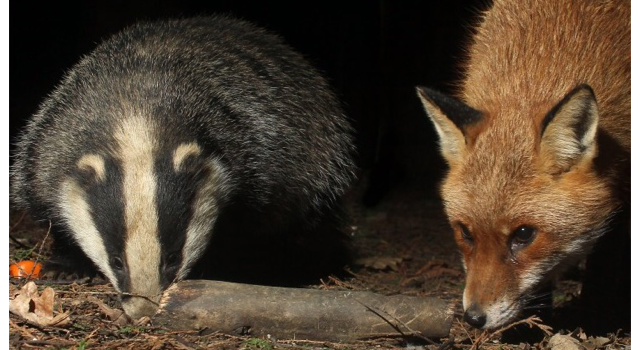 Shooting Badgers Is Unnecessary ..
Shooting badgers is a cruel answer to a farming problem when vaccinating the creatures would be humane and protect the countryside.
Environment Secretary Owen Paterson deserves both barrels from wildlife experts for culling an animal which is a quintessential part of the English landscape.
We don’t deny bovine TB is an expensive hazard for dairy and beef farmers.
But shooting Mr Brock is unnecessary and may not work.
( Daily Mirror )

Environment Secretary Owen Paterson, with the backing of Prime Minister David Cameron, has issued farmers with the first licence to shoot (murder) thousands of badgers.

We live in a world where half the people are not yet fully evolved or civilised.
And the animals are the victims of their mindless cruelty and ignorance.

Just be thankful you were not born a farm animal.

I don’t consume animal products because I refuse to violate their rights, and I refuse to condone the violence inflicted on the poor souls.

I am sometimes asked, ‘Why do you spend so much of your time and money talking about kindness to animals when there is so much cruelty to men?’
I answer: ‘I am working at the roots.’
( George Thorndike Angell, 1823 – 1909 )

Please don’t eat animals.
They are friends, not food.

Don’t destroy the homes of wild animals and then complain when they wander into yours.

Adding “humane” before slaughter doesn’t cancel out the slaughter.
It cancels out the guilt.

The Decision Is Appalling For Badgers ..
The decision is not only appalling for the badgers, it is also arrogant, ignorant and insulting to the researchers and scientists that are advising against it.
But then judging from his scepticism on climate change, Owen Paterson clearly has little respect for science.
Or compassion.
Apparently when he was a little boy he had two badgers as pets.
Perhaps they got more attention than he did?
Maybe the cull is some kind of vendetta?
Beware budgies, white mice, hamsters, dogs and pussy cats.
You’re next.
( Bill Oddie )

If your pet cat or dog had a disease and vaccination was available, would you ask the vet to kill it?
I don’t believe these gun-toting farmers are marksmen.
Badgers only show themselves when it’s dark and many will suffer slow, painful deaths.
It’s cruel.
It’s sickening.
And it’s unnecessary.

We live in a sad world where the majority of people not only accept, but passionately defend the cruelty and the suffering and the brutal death we inflict on “farm” animals, and those who choose not to feed off the violence and speak up for the animals are often ridiculed and called extremists.

There’s no such thing as a meat-eating animal lover.

Sentencing Badgers To Death ..
It is severe stress that makes cattle susceptible to bovine TB.
The dairy cow is impregnated to produce milk.
She bellows in agony every time we remove her calf and these unnatural pregnancies cause her excruciating udder infections.
Owen Paterson ordering the cull of badgers is tantamount to a judge sentencing someone to death on a suspicion they committed a crime.
Badgers being the main cause of bovine TB has always been more Chinese whispers than concrete evidence.
Scientists and researchers fail to agree that badgers are responsible.
These creatures have enough problems with morons blocking setts to stop foxes hiding from ‘hunts’, or sick creeps digging them up for badger baiting.
The last thing they need is gun-toting, trigger-happy farmers shooting at them.

The difference between animals and people?
The animals would never allow the dumbest ones to lead the pack.

People that eat animal products have only one thing they can say in defence for doing so: “It tastes good”.
So it’s very sad for the animals when so many people have a tongue that controls both their brain and their heart.

For a few moments of taste, we close our eyes to unimaginable suffering and brutal murder.

Farmers Cause Pain To Cows ..
Farmers desperate to win lucrative cattle show prizes are causing severe pain to their animals – by pumping their udders full of gas.
Experts say the use of the bizarre technique – used to improve a cow’s appearance by making the udder look full – has spiralled to the point it has become a ‘serious problem’.
Once the udder has been inflated, the animal’s teats are then sealed with superglue to stop milk, or the gas, leaking out.
There is ferocious competition to win agricultural prizes because champion animals are highly prized for breeding and can fetch as much as £100,000 at auction.
( Valerie Elliott )

I take good care of the animals I selectively breed into existence, because it’s important they don’t die before I have killed them.
( A. Creep, farmer )

When you eat meat and dairy products you are paying people to treat animals in cruel and horrific ways you would never do yourself.

Peace begins on your plate.

When people try to excuse and justify the killing of other species by comparing themselves with wild carnivore animals who kill their prey with the tools they were born with (teeth and claws, not weapons), who eat the flesh raw (not cooked, often with sauces and spices to enhance or disguise the taste), and tear the flesh with their teeth (not knives and forks) is pretty stupid.
And I haven’t yet heard of wild carnivore animals breeding other creatures by forcefully extracting semen from the male, forcefully impregnating the female and then eating the offspring.
( Rose Winfold )

A message for the cowards who call themselves “hunters” …
Your gun doesn’t make your dick bigger, it just makes you look like a bigger dick.

It irks me that animal rights activists are always portrayed as violent nutters, when I think the reverse is true.
I’ve had more abuse from farmers, threats from those who like to hunt, wielding guns, than from any other sector of society.
( Liz Jones )

To all the people I annoy by not eating meat and dairy products.
It’s not me, it’s your conscience.

We shouldn’t stop eating the flesh of animals because of diseases.
We should stop because it’s fucking cruel and fucking disgusting.

Seals Killed To Protect Scottish Salmon Farms ..
If you buy Scottish salmon you are essentially paying for seals to be shot.
It’s a total disgrace.
The Scottish Government, the RSPCA and the Scottish Salmon Producers’ Organisation (SSPO) all claim seals are only shot as a last resort.
That’s not just a fishy story, it’s a great big whopper of a lie.
Unless the farms install and maintain predator exclusion nets to humanely keep seals well away from the cage nets which hold the salmon, it is totally inaccurate to describe the shooting of seals as a last resort.
( John Robins, Animal Concern )

Never trust people who kill animals who trust them.

Some of the strongest animals on the planet are herbivores.
Most herbivores are mammals, or warm-blooded animals that feed their young milk from mothers.
Like the intestines of other herbivores, human intestines are very long.
Human evolution and physiology are herbivorous, and ample science proves that when we eat meat, that causes problems, from decreased energy and a need for more sleep up to increased risk for obesity, diabetes, heart disease and cancer.

I said: “Somebody should do something about the suffering we inflict on animals”.
Then I realised… I am somebody.

Canada Kills The Most Seals ..
Canada culls the most seals with hunters (murderers) killing 300,000 a year.
Most are pups, clubbed to death for their skins when they are just a few weeks old.
But the Canadian government claims they are also killed to protect cod stocks in the North Atlantic.
Greenland, Iceland, Norway and Russia also cull the animals for their skins, meat and oils.
The only country in the southern hemisphere to slaughter seals on such a large scale is Namibia in southern Africa – where more than 90,000 are killed every year.
The Namibian government claims the culls are necessary because seals eat more fish than the entire fishing fleet can catch.
About 40% of the world’s population of grey seals can be found in Britain, and more than 90% of them breed in Scotland.

We wish we could give you our pain and our misery for just one moment.
Not to hurt you, but to make you understand how you hurt us.
( Farm Animals )

Every creature with a sentient brain wants to live free from harm.

The last few moments of every farm animal are spent in fear and terror.

Dogs are our best friends, but we humans are far from being theirs.

A Cruel, Depraved, Demonic Activity ..
When you put on fancy dress, ride on a horse across the countryside shouting “Tally Ho!”, and then cheer and gain pleasure from watching a pack of dogs tear a fox to pieces, every sane person in the room thinks you’re either a psychopath or a sadist, or suffering from a serious mental disorder.
It’s very worrying and disturbing that the people who run the country, the Conservative Party, support this cruel, depraved, demonic activity.
( Rose Winfold )

You will never understand the misery and the suffering of animals until you climb into their skin and walk about in it.

When they say: “Please, I don’t want to watch or know about the way animals suffer to become food on my plate”.
What they really mean is: “Please don’t tell me, because I want to keep continuing what I do, and I do not want to sacrifice my pleasure for their pain”.

The only thing that farm animals have is a short life of suffering.

When you eat “meat”, you are eating the flesh of someone who wanted to live.

Farm Animal Waste Products Cause Pollution And Disease ..
More than half of all the water consumed in the U.S. is used to raise animals for food.
It requires 2,500 gallons of water to produce a pound of meat.
Meanwhile, it takes only 25 gallons of water to produce a pound of grain.
Livestock in the United States produce an enormous amount of animal excrement, 130 times more than human excrement.
Each second the animals release 97,000 pounds of feces.
Most of the water used for livestock drinking and servicing returns to the environment in the form of manure and wastewater.
These waste products enter streams and rivers, polluting water sources and causing disease outbreaks that affect all species.
( Thich Nhat Hanh, 2008 )

If you think vegans are loud, you should hear the screams inside a slaughterhouse.

Nothing is worth the cruelty and the suffering of animals.
NOTHING!

For you, it’s just a meal.
For them, it’s life itself.

Animals can’t speak for themselves, that’s where we come in.

Dumb Excuses ..
People that eat the flesh from rotting corpses should be honest and just admit they like the taste, instead of using dumb excuses to justify the murder of animals.
Like “God says it’s ok”, or “it’s in the Bible”, or “wild animals kill other animals”, or “humans are natural omnivores”, or “plants feel pain as well”.
Humans must be the only omnivores on the planet who use a weapon to kill their prey, who use tools to butcher the corpse, who cook the flesh, often using spices and sauces, and then use a knife and fork to eat.
Dumb excuses = Dumb people.
( Rose Winfold )