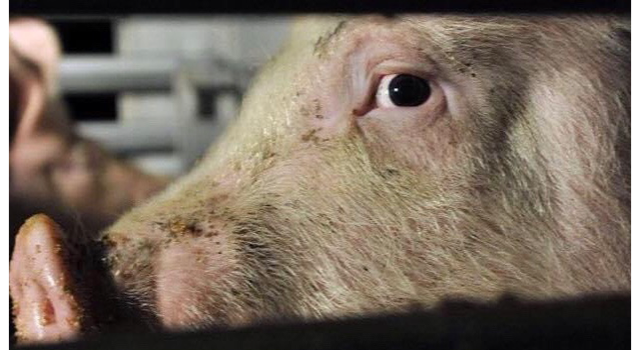 We search for life on other planets and in other regions of our galaxy.
Meanwhile, we destroy and ignore the other life on this planet.
( Anthony Douglas Williams )

We are all children of the Universe, just living in different bodies.

They are sad.
They are scared.
They are confused.
They wonder.
They hope.
They cry.
PLEASE ADOPT OR FOSTER A SHELTER DOG.

A suspect meat scandal in China engulfed Starbucks and Burger King and spread to Japan where McDonald’s said a Chinese supplier accused of selling expired beef and chicken had provided 20% of the meat in its chicken nuggets.
( The Guardian, 22.07.2014 )

Animals do not exist to satisfy the whims and appetites of humans.
They exist for their own reasons.
And they owe us nothing.

McDonalds in Japan has said it will stop importing chicken from China and its restaurants will stop selling the meat, following a food safety scandal in which expired meat was sold to fast food outlets.
The hamburger chain said it would start sourcing all its chicken from Thailand in order to address the concerns of its customers.
McDonald’s 3,000 restaurants across Japan serve eight dishes using chicken sourced from China, including Chicken McNuggets and Chicken Fillet-O.
Hong Kong’s McDonald’s restaurants have also taken chicken nuggets and chicken burgers off the menu after a mainland Chinese supplier was accused of selling expired meat.
( The Guardian, 25.07.2014 )

For the animals who suffer at the hands of evil humans.
We are sorry you were born into this cruel, twisted, greedy world.

We humans are so arrogant yet so insecure about our strength and power.
No wonder I love my dogs.
No ego, no head games, no power struggles.
Just love and acceptance and peace in the pack.
( Catherine Ann Short )

I believe that hunting with dogs is a barbaric practise that in no way can be justified as sport, and must be banned in our society before we can think of ourselves as civilised.
The animals with which we humans share this planet deserve our respect and kindness rather than the cruel tortures we too often inflict upon them.
( Paul McCartney )

Animals are the victims of the choices we make.

Today more than ever before, life must be characterised by a sense of universal responsibility, not only nation to nation and human to human, but also human to all other forms of life.
( Dalai Lama )

We abuse animals simply because we are more powerful.
It’s how cowards and bullies behave.
We are not morally superior.

Heaven goes by favour.
If it went by merit, you would stay out and your dog would go in.
( Mark Twain )

If you haven’t done so, watch one of the many slaughterhouse videos.
It will reveal a dark side of humanity you never knew existed.

Every life a man takes from another animal, also takes a life from another family.
( Anthony Douglas Williams )

Humans are just a part of the animal kingdom.
Not apart from it.
Not superior to it.

All animals are somebody.
Somebody with a life of their own.
Behind those eyes is a story, the story of their life.
In their world as they experience it.
( Tom Regan )

No living being who is innocent deserves to be in a cage.
None.

Don’t treat animals as animals.
Treat them as living beings.
That’s what they are.
( Anthony Douglas Williams )

Animal abuse is the oppression of the weak by the strong.
As in ethic, religious, political, and social conflicts.

One of the most dangerous things that can happen to a child is to kill or torture an animal and get away with it.
( Margaret Mead )

Come forth into the light of things.
Let nature be your teacher.
( William Wordsworth )

In most countries it is illegal to raise cats and dogs for meat.
Other intelligent animals like pigs, cows and sheep don’t have this privilege.

Heaven is under our feet as well as over our heads.
( Henry David Thoreau )

Animals never worry about Heaven or Hell.
Neither do I.
Maybe that’s why we get along.
( Charles Bukowski )

Killing healthy dogs simply because they are homeless is WRONG.
Murderers, paedophiles and rapists are treated with more compassion.

Animals don’t lie.
Animals don’t criticise.
If animals have moody days, they handle them better than humans do.
( Betty White )

Never break a promise to an animal.
They’re like babies.
They won’t understand.
( Tamora Pierce )

I have studied many philosophers and many cats.
The wisdom of cats is infinitely superior.
( Hippolyte Taine )

There is no religion without love.
And people may talk as much as they like about their religion.
But if it does not teach them to be good and kind to man and beast, it is all a sham.
( Anna Sewell )

Do you eat chicken because you are familiar with the scientific literature on them and have decided that their suffering doesn’t matter, or do you do it because it tastes good?
( Jonathan Safran Foer )

Animals are born who they are, accept it, and that is that.
They live with greater peace than people do.
( Gregory Maguire )

No one should be subjected to pain and no one’s life should be taken away.
No matter what their species.
It’s that simple.
( Maryanne @Francesgracella )

The day will come when we realise all living beings are equal.
All just precious souls living in different bodies.

Our food should come from the earth.
Not from the suffering and the murder of gentle animals.
( Eileen Hutchison )

Wild monkeys in the Fukushima region of Japan have blood abnormalities linked to the radioactive fall-out from the 2011 nuclear power plant disaster, according to a new scientific study that may help increase the understanding of radiation on human health.
The Japanese macaques were found to have low white and red blood cell levels and low haemoglobin, which the researchers say could make them more prone to infectious diseases.
( The Guardian, 24.07.2014 )

If every parent and every school teaches children that all life is precious.
Then our animals will have some hope.

The wrong creature is on the end of the chain.
It should be MAN, the master of cruelty!
( Rose Winfold )

We must stop people in Australia thinking of the dingo as a pest and to stop them being slaughtered.
They have the same right as humans to live on this planet without the fear of being murdered.
What makes humans think they have more rights to live in relative safety?
( karen dennis @sookie165 )

Animals that have committed no crimes are imprisoned for life.
Paedophiles and rapists are set free and walk among us.

Beef is around TEN times more damaging to the environment than any other form of livestock.
( National Academy of Sciences )

One Day ..
All animals will be free.
All children will be safe.
And the evil and the wicked will be turned to dust and blown away by the wind.

All living beings are precious souls.
If only we could look into each other’s hearts.
We would then understand.
( Florence Emily Hookins )

A new dog will not replace the one you have lost.
But the old dog has left enough love in your heart for the new one.

I can’t imagine not loving an animal.
Not in my world.
Mine love me unconditionally, and the feelings are returned.
( Kim @finallycaved1 )

Last year in the UK there were at least 37,000 pig’s heads with abscesses or TB lesions.
( Ron Spellman, Food Inspectors Leader )

Cruelty is cruelty, whether it is a dog or a cow.
All animals have the right to live free from abuse.
( Maryanne @Francesgracella )

When we look at the world through another animal’s eyes, we see that inside we’re all the same and that we all deserve to live free from suffering.
( Joaquin Phoenix )

One time I fell in love.
I thought they would love me.
I did my best to make them love me.
But I wasn’t loved.
( Shelter dog )