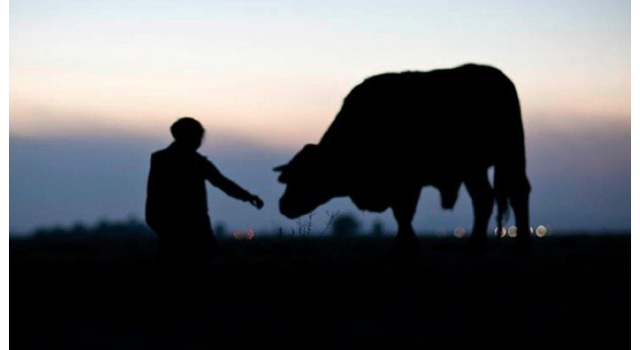 It shouldn’t be the consumer’s responsibility to figure out what’s cruel and what’s kind, what’s environmentally destructive and what’s sustainable.
Cruel and destructive food products should be illegal.
We don’t need the option of buying children’s toys made with lead paint, or aerosols with chlorofluorocarbons, or medicines with unlabeled side effects.
And we don’t need the option of buying factory-farmed animals.
( Jonathan Safran Foer )

The horrific crimes against non-human animals are up with the worst crimes in human history.

The Torture Of Cats ..
In 2012, there was public outcry after the BUAV uncovered research at Cardiff University on litters of new born kittens who were raised in total darkness or deprived of sight in one eye by having their eyelids sewn shut.
After 12 weeks, the kittens were anaesthetised and their skulls cut open to expose their brains.
Images were taken of their brains’ responses to visual stimuli, after which the kittens were killed and parts of their brains removed for further analysis.
In a more recent publicly-funded experiment published in 2014, researchers at University College London and Moorfields Eye Hospital sliced open the eyelids of 6 young cats (under anesthesia) to allow easier access to the eye before a clamp was inserted to hold the eyelids back.
Part of the sclera (white of the eye) was then cut open to allow for the insertion of an infusion tube so that the vitreous gel in the middle of the eye could be removed.
Three of the cats were also subjected to another surgical procedure to remove the lenses in their eyes.
Under the banner ‘Cats and dogs are our best friends – they don’t belong in laboratories’, the BUAV is asking for the Government to end their use for experimentation in the UK.
CEO of the BUAV, Michelle Thew, said:  “Over 5 million families in the UK share their home with one or more cats yet these much loved animals are still being used in cruel and unnecessary tests.
We are delivering our report to the Home Office in order to highlight the suffering and present our argument for alternatives to be used to end such cruelty.”
( Look To The Stars, 03.06.2014 )

Sadness, misery, sorrow and loss is the same for all living beings.
But so many humans don’t get it, don’t understand, or just don’t care.

Million of animals just like the dogs and cats we share our homes with are killed for their fur in China each year.
They suffer in cramped, filthy cages until they are bludgeoned or electrocuted, and some will have their skin ripped off while they are still conscious.
( PETA )

One day all humans will realise that if there is ever to be peace on Earth we must respect and encompass all living beings.

Kindness and compassion towards all living things is a mark of a civilized society.
Conversely, cruelty, whether it is directed against human beings or against animals, is not the exclusive province of any one culture, or community of people.
( César Chávez )

Once upon a time there was a family who loved animals.
So they didn’t eat them.
The End.

Personally, I would not give a fig for any man’s religion whose horse, cat and dog do not feel its benefits.
Life in any form is our perpetual responsibility.
( S. Parkes Cadman )

The best taste on Earth is peace.

Animals give me more pleasure through the viewfinder of a camera than they ever did in the crosshairs of a gunsight.
And after I’ve finished “shooting,” my unharmed victims are still around for others to enjoy.
I have developed a deep respect for animals.
I consider them fellow living creatures with certain rights that should not be violated any more than those of humans.
( Jimmy Stewart )

You know why our Governments are not too concerned about animal cruelty?
Animals don’t vote!

Animals can communicate quite well.
And they do.
And generally speaking, they are ignored.
( Alice Walker )

When I needed a hand, I found a paw.

We Are Their Only Hope ..
For the horse forced to pull people in a carriage in extreme temperatures, the dog tethered in a backyard, the whale swimming in circles of boredom in a tank, the circus elephant being jabbed with a bullhook and transported across the country in a truck, the rabbit enduring ghastly experiments in a lab, the pig wondering why she has been caged, the fox about to be skinned for her fur, the polar bear trapped in the zoo, and the turkey about to be scalded alive, everything we do matters.
We owe it to them to consider these questions.
We are their only hope.
( Kirscher’s Korner, 03.05.2014 )

Of course, consumers might notice that their chickens don’t taste quite right.
How good could a drug-stuffed, disease-ridden, shit-contaminated animal possibly taste?
But the birds will be injected (or otherwise pumped up) with “broths” and salty solutions to give them what we have come to think of as the chicken look, smell, and taste.
A recent study by Consumer Reports found that chicken and turkey products, many labeled as natural, “ballooned with 10 to 30 percent of their weight as broth, flavouring, or water.”
( Jonathan Safran Foer )

Why do vegans need to explain to non-vegans that it’s wrong to be violent to other species of animals?

We recognise cowards by the way they treat animals.

A human body in no way resembles those that were born for ravenousness.
It hath no hawk’s bill, no sharp talon, no roughness of teeth, no such strength of stomach or heat of digestion, as can be sufficient to convert or alter such heavy and fleshy fare.
But if you will contend that you were born to an inclination to such food as you have now a mind to eat, do you then yourself kill what you would eat.
But do it yourself, without the help of a chopping-knife, mallet or axe, as wolves, bears, and lions do, who kill and eat at once.
Rend an ox with thy teeth, worry a hog with thy mouth, tear a lamb or a hare in pieces, and fall on and eat it alive as they do.
But if thou had rather stay until what thou eat is to become dead, and if thou art loath to force a soul out of its body, why then dost thou against nature eat an animate thing?
There is nobody that is willing to eat even a lifeless and a dead thing even as it is.
So they boil it, and roast it, and alter it by fire and medicines, as it were, changing and quenching the slaughtered gore with thousands of sweet sauces, that the palate being thereby deceived may admit of such uncouth fare.
( Plutarch, 45 AD – 120 AD )

We have built a world of prisons for animals that have committed no crime.

Killing animals for pleasure is rooted in mental illness.

When we return wild animals to nature, we merely return them to what is already theirs.
For man cannot give wild animals freedom, they can only take it away.
( Jacques Cousteau )

Beating Donkeys Is The Will Of Allah ..
In Ethiopia, I was shocked the people didn’t give water or shade to their donkeys.
The woman from the charity I was travelling with, trying to stop me wrestling a whip from a man to use it on him instead, said, “Give these people time. They have to learn compassion”.
“But they have had enough time!” I shouted.
“They were the first humans on Earth!”
In Somalia, in a refugee camp, I snatched a whip off a young boy who was beating his donkey, and lectured him furiously.
The aid workers from Save The Children couldn’t believe their eyes at my behaviour.
But surely, if you are hungry, thirsty and exhausted, you should have empathy with another creature in exactly the same boat?
On a dusty road in Ethiopia we stopped a group of boys beating a donkey that could go no further.
“Why are you doing this?” I asked them.
“It is the will of Allah’, they said, thinking I was the insane person for crying over an animal’s wounds.
In Romania, I saw cars swerve to run over dogs and puppies.
( Liz Jones, 01.06.2014 )

Animals belong in our hearts, not in our stomachs.

Love of animals is a universal impulse, a common ground on which all of us may meet.
By loving and understanding animals, perhaps we humans shall come to understand each other.
( Dr Louis J. Camuti )

Who are we as Human Beings if we ignore the suffering of other living beings?

Animals are not here for us to do as we please with.
We are not their superiors.
They have the same rights on this earth as we do.

If it’s too difficult to watch footage of animals being slaughtered, why is it so easy to keep contributing to it?

Compassion Hurts ..
When you feel connected to everything, you also feel responsible for everything.
And you cannot turn away.
Your destiny is bound with the destinies of others.
You must either learn to carry the Universe or be crushed by it.
You must grow strong enough to love the world.
Yet empty enough to sit down at the same table with its worst horrors.
( Andrew Boyd )

To know even one life has breathed easier because you have lived.
This is to have succeeded.
( Ralph Waldo Emerson )

This is my beautiful baby.
I love him as you do your child.
I care for him as you care for your child.
I would give up my life for my baby, as I’m sure you would yours.
Please, I am begging you, stop killing my brothers and sisters and our children.
I want my baby to live, and breathe, and enjoy this wonderful Earth.

If at any time the images of animal cruelty disturbs you, make sure you imagine how scared, hopeless and desperate that animals eyes must look.
Kind of looks like your eyes when you see the images, I imagine.
It’s okay to feel sad and angry, but it’s not okay to turn away from animal cruelty and abuse.

If you don’t like seeing pictures of violence towards animals being posted, you need to help stop the violence, not the pictures.
( Johnny Depp )

Mother Nature is our teacher – reconnecting us with Spirit, waking us up and liberating our hearts.
When we can transcend our fear of the creatures of the forest, then we become one with all that is.
We enter a unity of existence with our relatives – the animals, the plants and the land that sustains us.
( Sylvia Dolson )

God’s prophet Isaiah made it clear that killing an animal is no different than killing a person, and those who do will be punished.
( Isaiah 66.3 )