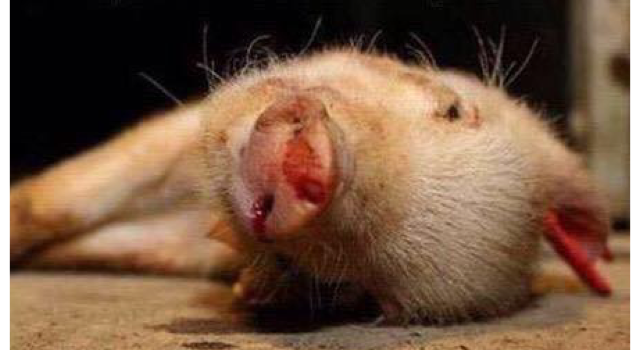 The Single Biggest Way To Reduce Our Impact On Earth ..
The word ‘veganism’ first came about in 1944, when teacher Donald Watson founded The Vegan Society in Leicester.
It’s a philosophy and way of living which seeks to exclude, as far as is possible and practicable, all forms of exploitation of, and cruelty to, animals for food, clothing or any other purpose.
It’s no longer disputed that eating less meat is better for the planet.
Animal agriculture is the leading cause of environmental destruction, species extinction, ocean dead zones and water pollution, yet we do little to counter it.
Studies prove that swapping to a vegan diet is the single biggest way to reduce our impact on earth.
Critics of veganism frequently argue that soya is unsustainable, yet only 6% of all soya is used for human consumption.
The overwhelming majority is used for animal feed.
Countless studies link major diseases like cancer, heart disease, stroke and diabetes to the consumption of animal protein.
Switching to a plant-based diet has been proven to prevent, treat and even reverse heart disease and type two diabetes.
The health benefits of a plant-based diet have never been clearer.
Tennis stars Serena and Venus Williams, F1’s Lewis Hamilton, boxer David Haye and many other elite athletes have all cited their vegan diet as reasons for their success, claiming they feel stronger and faster and their recovery is quicker.
( Selene Nelson )

If you knew how meat was raised, you wouldn’t eat it.
( Justin Timberlake )

8-Year Study Found That Eating Chicken Increases The Risk Of Cancer ..
Britons consume around 1.3 billion chickens every year and has widely been regarded as a healthy alternative to red meat.
But Oxford University researchers have found that eating chicken is positively associated with a higher risk of non-Hodgkin’s lymphoma, a type of blood cancer, an increased chance of prostate cancer in men, and malignant melanoma.
Researchers tracked 475,000 middle-aged Britons from 2006 to 2014, analysing their diet and the diseases they developed.
The study also found that bacon and sausages fuel cancer twice as much as previously thought.
Just 25g of processed meat daily, equal to one rasher or 2/3 of a sausage, raises the risk of bowel tumours by 20%.

Going meat-free can make a huge difference.
Studies show that vegetarians are, on average, 10 to 20 pounds lighter than meat-eaters and that a vegetarian diet reduces our risk of heart disease by 40% and adds seven or more years to our lifespan.
( Ingrid Newkirk )

Eating Any Meat Poses Serious Health Risks ..
The World Health Organisation declared processed meat a ‘carcinogen’ that increases the risk of colon or rectum cancer by 18%.
But it’s not just processed meat that poses a health risk.
Science has known for a while that eating all kinds of animals, including white meat, is unhealthy.
Eating any meat, hormone-free or not, poses serious long-term risks to our health.
A vast array of studies from top universities and independent researchers has found that eating chickens, cows, pigs and other animals promotes cancer in many forms.
Large studies in England and Germany showed that vegetarians were about 40% less likely to develop cancer compared to meat-eaters, the most common forms being breast, prostate, and colon cancers.
A 2014 Harvard study found that just one serving a day of red meat during adolescence was associated with a 22% higher risk of pre-menopausal breast cancer and that the same red meat consumption in adulthood was associated with a 13% higher risk of breast cancer overall.
( Len Firswood, 11.11.2015 )

We need protein, not meat.
We need calcium, not milk.
We need omegas, not fish.
We need nutrients, not the life of an animal.
All of which can be found in a plant-based diet.

Eating Meat Is Killing People ..
A “meat tax” could prevent almost 6,000 deaths per year in the UK, according to researchers.
Scientists at the University of Oxford say governments should consider imposing price hikes on red meat – such as beef, lamb and pork – to reduce consumption.
They say it would save lives and more than £700million in UK healthcare costs, according to new research.
Various research has linked eating red meat to an increased risk of heart disease, stroke and diabetes.
Researchers at the University of Oxford said meat eaters were also increasing the burden on the health service and the economy, due to a loss of workforce from ill health.
There is also a growing awareness of the environmental impact of eating red meat, with high levels of land and water use and carbon emissions associated with its production.
( BBC News, 07.11.2018 )

Most parents will do almost anything for their children.
Except, it seems, replacing burgers and junk food with tasty plant-based alternatives, so their children will have a healthy life and a planet to live on after them.

Consuming Meat And Dairy May Cause Impotence ..
Meat, eggs, and dairy products slow the flow of blood to all the body’s organs, and not just the heart.
Originally, it was thought that impotence was caused only by anxiety, but according to the Erectile Dysfunction Institute, up to 90% of all cases of impotence are actually physical as opposed to psychological, meaning the high cholesterol, obesity, diabetes, prostate cancer or inflammations, and hormonal imbalances that eating meat causes might also contribute to impotence.
Numerous physicians and nutritionists agree that the best way to prevent artery blockage as well as multiple other conditions that cause impotence is to eat a diet high in fibre, including plenty of fruits, vegetables, and whole grains.
( Rachel Krantz, 15.02.2016 )

Factory Farms Are Harmful To Both Animals And Humans ..
Since 2010, the UK Government have been quietly introducing American-style factory farms.
The number of large-scale, intensive farms with upwards of 40,000 chickens or 2,000 pigs is increasing, driven by demand for cheap meat.
Figures reveal that the number of large industrial-sized pig and chicken farms in the UK continues to rise, with around 1,800 across the country.
In 2017, the then Environment Secretary Michael Gove told MPs: “One thing is clear. I do not want to see, and we will not have, US-style farming in this country.”
Animal welfare charities say 70% of UK farm animals, more than 1 billion animals every year, are now kept in intensive indoor units.
Intensive pig and poultry farms have been linked to local biodiversity damage from ammonia emissions and to detrimental impacts on local communities including noise pollution, increased traffic, and potentially harmful bacteria, viruses and air pollutants.
Just imagine the body waste alone that has to be disposed of from these cruel, houses of horror.
The rivers, the streams, the lakes, and even the soil is polluted.
This in turn severely affects wild animals and plant life.
Nearly all viruses and diseases that are harmful or life-threatening to humans can be traced back to humans unnaturally interacting, exploiting and consuming animals.
( Rose Winfold )

Cow’s Milk Increases The Levels Of Female Hormones In Men ..
Men worry about the estrogen in milk since estrogen is associated with being a predominantly female hormone.
The estrogen in milk from cows can affect the blood estrogen levels in men and cause them to increase.
The growth hormones in cow’s milk may also be of concern since research confirms they increase risk of prostate cancer in men.
There is a myth that cows naturally produce milk on their own.
Like humans, female cows produce milk as a result of becoming pregnant with a baby cow.
Also like humans, pregnant cows have higher levels of estrogen than non-pregnant cows.
Some researchers are concerned with the consumption of milk, especially in men and children, from pregnant cows that have been genetically improved to lactate more.
A study in February 2010 found that commercial cow’s milk contains large amounts of estrogen and progesterone, which are two sex hormones.
The study found that the female sex hormones significantly increased while the male sex hormones decreased in men following the consumption of cow’s milk.
Estrogen levels increased significantly in all participants, men, women and children.
The study also suggested that the sexual maturation of prepubertal children could be affected by the regular intake of cow’s milk.
This is due to the suppressing effect of estrogen in milk on gonadotropin, which are hormones that increase the production of sex hormones needed for puberty.

Shockingly High Sugar Content ..
After presenting BBC1’s The Truth About Sugar a couple of years ago, one of the findings that stuck with me was that some bags of Haribos contained up to 39 teaspoons of sugar – yes, that’s right, THIRTY-NINE teaspoons.
I notice its latest ad campaign promoting a 30% sugar reduction claims “less sugar, same great taste”.
Basically, not so much sugar, but still 26 teaspoons of the sweet stuff per bag.
That’s TWENTY teaspoons more than the recommended maximum daily allowance.
( Fiona Phillips, 28.04.2018 )

Go Vegan And Nobody Gets Hurt ..
The vegan movement supports both non-human and human animals and helps them to live better lives.
The term vegan refers to those who choose not to support the humiliation, exploitation, torture and killing of innocent animals.
One doesn’t eat leather, or ingest duck down or consume wool.
You can’t munch on a circus or chow down on a zoo.
It’s also notoriously difficult to scoff a horse race.
Sadly, animal abuse doesn’t end with eating them.
As for those who say they won’t go vegan because they don’t want to eat processed foods, my jaw drops every time I hear that one.
Do they have no idea how much processing meat, milk and egg products go through before they reach the supermarket shelves?
Some seem to imagine that a burger made from plants is ‘unnatural’ where as one made from a cow’s butt couldn’t be more pure.
What utter nonsense.
They seem to dismiss the antibiotics that are pumped into animals reared for meat, the hormones that rage inside two thirds of dairy cows at any one time (because they’re pregnant) and therefore make it into the milk humans consume, the colouring that is added to salmon to make it look pink, the water injected into chickens to make them heavier (as they’re sold by weight), and don’t even get me started on bacon.
Health and veganism are connected, in that having a whole foods, plant based diet (along with regular exercise and mindfulness) is your best chance of leading a long and healthy life.
However, veganism is an ethical choice and non-human animals must be at the centre of it.
Go vegan and nobody gets hurt.
( Tofu Temptress, 18.09.2017 )

The Heroin Of Childhood

Is What You Eat Your Personal Business?

Lives Are Being Lost

We Are Losing The Battle Against Childhood Cancer .. A terrifying 40% rise in children's…