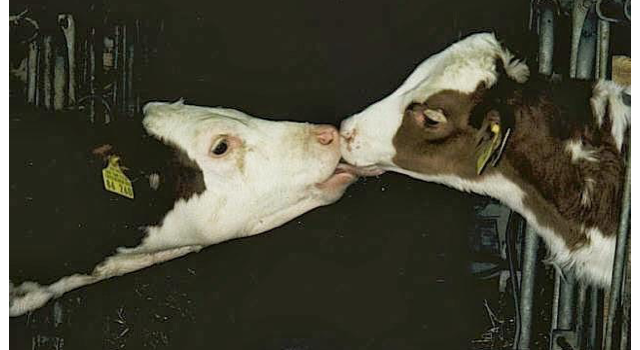 Family Pets Abandoned By Callous Owners ..
Hundreds of family pets are facing a summer of misery with one abandoned every hour, says the RSPCA.
More dogs and cats are dumped over the school holidays than after Christmas as cruel owners jet off abroad, leaving their animals to fend for themselves.
July is the toughest month for the charity as it struggles to deal with hundreds of cases of pets left to rot.
The RSPCA says one reason this happens is owners book a holiday and then fail to find anyone to look after their pet while they are away.
RSPCA Supt Simon Osborne said, “Every day inspectors face cases where animals have been left abandoned in fields, dumped in boxes, left for dead at the side of roads and even outside our animal centres and hospitals.”
( Lewis Panther, 09.07.2017 )

Every animal on a factory farm is treated in a way that would be considered illegal if done to a dog or a cat.
( The New York Times )

I think ‘vegan’ is a beautiful word.
It is more than just a description for our diet.
I see it as a visible template for an ethical, healthy, responsible, and rational life.
Because it describes our character, it says we do not take the life of another living being to satisfy our wants.
( Philip Wollen )

Are they not worthy of life, and you think you are?
( Rose Winfold )

It makes no sense to go through an animal to get to the nutrients that the animal gets because the animal ate plants.
( Colleen Patrick-Goudreau )

People scare me.
I don’t like people.
( Rose Winfold )

I’m no shrinking violet.
I played hockey until half my teeth were knocked down my throat.
And I’m extremely competitive on a tennis court.
But that experience at the slaughter-house overwhelmed me.
When I walked out of there, I knew I would never again harm an animal.
I knew all the physiological, economic, and ecological arguments supporting vegetarianism, but it was first-hand experience of man’s cruelty to animals that laid the real groundwork for my commitment to vegetarianism.
( Peter Burwash )

Most people are not accustomed to worry about suffering when it’s other than human suffering.
Most people think nothing of the unnecessary mass abuse and brutal killing of animals.
The basic unassailable principal allows us to take animals and do just about whatever we want with them.
That they are property, not free to live their life, here to serve the arrogant, greedy human species.

Other Species Are Not On This Earth For Our Amusement ..
They’re abusement parks.
How much longer must highly intelligent and self-aware individuals suffer before we understand that other species are not on this earth for our amusement?
It’s clear to anyone with a brain and an ounce of compassion that marine parks are nothing more than concrete prisons which cause captive marine animals a world of suffering.
Orcas at these facilities are forced total day after day, repeating the same endless tasks with no choice in the matter and no means of escape.
How utterly miserable their lives must be.
The only way to end the abuse of captive orcas and other marine animals is to stay away from and speak out against facilities that keep them captive.
( Roger Moore )

A dog reflects the family life.
Whoever saw a frisky dog in a gloomy family, or a sad dog in a happy one?
Snarling people have snarling dogs, dangerous people have dangerous ones.
( Arthur Conan Doyle )

Dogs do speak, but only to those who know how to listen.
( Orhan Pamuk )

No matter how close we are to another person, few human relationships are as free from strife, disagreement, and frustration as is the relationship you have with a good dog.
Few human beings give of themselves to another as a dog gives of itself.
I also suspect that we cherish dogs because their unblemished souls make us wish, consciously or unconsciously, that we were as innocent as they are, and make us yearn for a place where innocence is universal and where the meanness, the betrayals, and the cruelties of this world are unknown.
( Dean Koontz )

Dogs are the leaders of the planet.
If you see two life forms, one of them’s making a poop, the other one’s carrying it for him, who would you assume is in charge?
( Jerry Seinfeld )

Destruction of Nature, and Nature’s resources, result from ignorance, greed, and lack of respect for the Earth’s living things.
( Dalai Lama )

So far as animals are concerned the Tories are the nastiest party the country’s ever seen.
One of our defining characteristics used to be our love of animals.
Now it looks like we are in danger of electing a party that is for elephant poaching, fox hunting and the use of wild animals in circuses.
I despair.
( Peter Egan )

Chewing gum thrown on the ground looks like bread to birds, which try and eat it.
It fouls their entire systems and prevents them ingesting any real nourishment or water.
So they die slowly.
( Dion Felsrow )

You always fed strays and bent down to talk to the dogs you met on the street, looking straight into their eyes as if they were old friends.
You liked to go to the pound and look at them.
You tried to send them messages of comfort.
I couldn’t go because I started crying the one time I tried.
All those eyes and the barks like sobs.
( Francesca Lia Block )

When I am feeling low all I have to do is watch my cats and my courage returns.
( Charles Bukowski )

More Than One Million Native Animals Killed Every Year In The U.S ..
Every year the U.S. Department of Agriculture’s Wildlife Services kills over a million Native animals, including foxes, bobcats, bears and coyotes.
This sickening government program, typically carried out at the behest of the agricultural industry, is an ugly enterprise that relies on poisons, painful traps, strangulation snares and helicopter gunners.

It may be a cat, a bird, a ferret, or a guinea pig, but the chances are high that when someone close to you dies, a pet will be there to pick up the slack.
Pets devour the loneliness.
They give us purpose, responsibility, a reason for getting up in the morning, and a reason to look to the future.
They ground us, help us escape the grief, make us laugh, and take full advantage of our weakness by exploiting our furniture, our beds, and our refrigerator.
We wouldn’t have it any other way.
Pets are our seat belts on the emotional roller coaster of life.
They can be trusted, they keep us safe, and they sure do smooth out the ride.
( Nick Trout )

If animals go into slaughterhouses alive and come out chopped up into hundreds of pieces, how could anyone claim that they aren’t being mistreated, abused, tortured and terrorised?
( Gary Yourofsky )

For the sake of a mouthful of flesh, we deprive a soul of the life it had been born into the world to enjoy.
( Plutarch )

Because I’m a civil rights activist, I am also an animal rights activist. Animals and humans suffer and die alike.
Violence causes the same pain, the same spilling of blood, the same stench of death, the same arrogant, cruel and vicious taking of life.
We shouldn’t be a part of it.
( Dick Gregory )

Killing For A Living ..
The slaughter-house is the limbo between life and death for billions of animals every year.
There are around 150 slaughter-houses in the UK.
Slaughter-house workers are increasingly reporting symptoms of post traumatic stress disorder including extreme anxiety, domestic violence, drug and alcohol abuse and social withdrawal.
Criminologists at the University of Windsor in Canada reported in a study that there is a strong relationship between the location of a slaughter-house and high crime rates in American communities.

In a world where even humans are treated brutally, it’s no wonder that so many animals live their entire life trembling with fear.
( Rose Winfold )

A Vegetarian Saves More Than 25 Land Animals Each Year ..
The way a vegetarian saves animals is by reducing the demand for meat and causing fewer animals to be born into a harsh life owned by the meat industry, where callousness abounds and mercy is scant.
Even a vegan diet causes a certain number of deaths and some amount of suffering.
Mice, moles and other small animals die in the cultivation of grains and pulses on modern farms.
They get run over by agricultural equipment such as tractors or they die as a consequence of the disruption of their land.
Many small animals also die from poisoning by pesticides.
But, the animals we eat do not just exist in isolation waiting for us to eat them.
They eat grains too.
In fact, almost all the animals we eat are ones kept caged by us inside desolate barns and kept fed by us on grains we grow just for them.
We grow soy, corn, wheat, barley, sorghum and other grains on vast tracts of land, all of which also cause large numbers of deaths.
Meat consumption remains an inherently inefficient process in which we grow far more crops to feed to the animals we eat than we would need if we ate the crops directly ourselves.
So, while the cultivation of crops to feed a vegetarian does kill some animals, far more animals die in the cultivation of crops to feed the animals we eat.
A large number of animals in our factory farms die even before they reach the moment of slaughter.
They die of untreated illnesses and injuries, rough transportation, and various skeletal and other problems caused by intense genetic selection for excessively rapid growth.
Many of them also die during or after their use as breeders.
Some die in research experiments serving the meat industry.
Some live long enough to get to the slaughter plant but are condemned by federal inspectors during the required ante-mortem screening because they are too sick, injured, or otherwise unfit for human consumption.
A vegetarian saves more than 25 land animals each year.
( An extract from an article by Harish, March, 2015 )

The real difficulty in being vegan doesn’t involve food.
The hardest part about being vegan is coming face-to-face with the darker side of humanity and trying to remain hopeful.
It’s trying to understand why otherwise good and caring people continue to participate in needless violence against animals – just for the sake of their own pleasure or convenience.
( Jo Tyler )

Thousands of people who say they love animals sit down once or twice a day to enjoy the flesh of creatures who have been utterly deprived of everything that could make their lives worth living and who endured the awful suffering and the terror of the abattoirs.
( Jane Goodall )

Caged Foxes Fattened Up And Killed For Their Fur In Finland ..
An undercover investigation in western Finland found bloated animals barely able to move, five times their natural weight, with thick rolls of fur over their eyes.
Claire Bass, of anti-fur campaigners Humane Society International, said: “Just when you thought the fur industry couldn’t get more unethical, it hits a shocking new low with foxes bred so large the poor beautiful creatures can hardly move, or even see. The fur industry is about profit and cares nothing for welfare.”
Over the last five years more than £2.5million of fur items have been imported into the UK from Finland.
Despite the UK banning fur farming in 2000, campaigners insist we still import huge amounts from other countries.
( Tom Parry, 26.08.2017 )