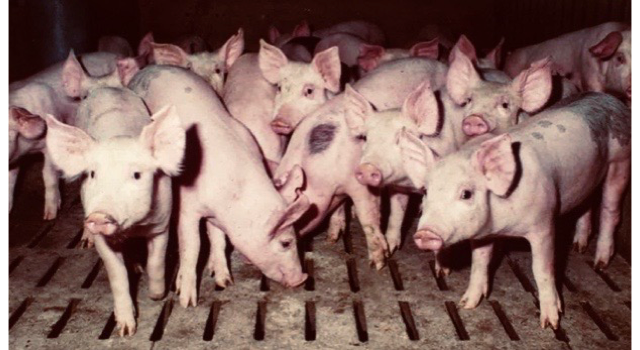 We do not need to kill and eat animals.
Our only defence for this is pleasure and convenience.
( Alfred Hookins, 1892-1956 )

There is no such thing as ‘humane’ meat.
All of the animals wanted to live.
Just like you and I want to live.

Scientists Are Against The Mass Murder Of Badgers ..
I feel very passionate about any issue that involves the unnecessary killing, as I use that word rather than ‘culling’ which always makes it sound better.
The killing of wildlife for mysterious reasons.
I don’t understand you see, why there is this intense passion to kill in thousands, this indigenous species of the United Kingdom who has actually not done anything wrong except be itself and live in its own way.
There are enough scientists that I respect who are totally against this.
It is not the way forward.
Where will it end?
( Virginia McKenna )

Every commercial ‘farm’ animal is tortured and abused from the day they are born, then hideously butchered.

He who is cruel to animals becomes hard also in his dealings with men.
( Immanuel Kant )

Imagine being born into a world where you are not only kept prisoner but abused.
When you have committed no crime apart from being you.

Save a soul that deserves to be loved.
Save a shelter animal.

You call me vermin, a nuisance, destructive.
Yet you humans have destroyed entire eco systems, hunted animals into extinction, and polluted both the air and the oceans.

I Wouldn’t Let Them On My Land ..
It’s moving deckchairs on the Titanic.
It’s not the solution.
It’s a knee-jerk reaction because the Government needs to be seen to be doing something, but all they’re doing is slaughtering badgers.
On my land there’s a huge badger sett.
There are no cattle, only sheep.
But if they started shooting I’d make it difficult for them.
I wouldn’t let them on my land.
I’m not afraid of guns.
I was in the Toxteth riots.
They wouldn’t get past me.
( Paul O’Grady )

When you shout for animals, some people want you to shut up.
They’ll call you a fanatic, an extremist, a bore.
But shout anyway.

The real difficulty in being vegan doesn’t involve food.
The hardest part about being vegan is coming face-to-face with the darker side of humanity and trying to remain hopeful.
It’s trying to understand why otherwise good and caring people continue to participate in needless violence against animals.
Just for the sake of their own pleasure or convenience.
( Jo Tyler )

All parents need to teach their children to care about all animals.
And not take them to zoos and stare at their misery.

The righteous one is aware of the soul of his animal, and the evil withhold their compassions.
( Proverbs, Aramaic )

To you it is just a meal.
But to them it’s existence itself.

A righteous man regards the life of his animal.
But the tender mercies of the wicked are cruel.
( Proverbs, King James )

Animal Cruelty ..
Seeking power and dominance and control by inflicting suffering on weak and vulnerable creatures.

Not many animals stand still.
They are all upset, some very frightened and some move violently.
The animals are never given time to calm down.
Sometimes the slaughter man misses, wounding the animal terribly instead of stunning it.
It may happen that the second shot cannot be done immediately and the animal is suffering for quite some time.
( Gabriele Meurer )

If you must kill me today, remember this.
I just wanted to be loved.
And I had lots of love to give.

If you believe God (Allah) wants you to kill and mutilate His loving creations, then you are either very stupid, or you are possessed by the devil (shaytan).
( Eileen Hutchison, 1926-2008 )

You may never know the pain and suffering a rescued animal has been through, but you will know their gratitude and their boundless love.

What kind of society have we become when we allow innocent animals to be born just to be abused from the minute they arrive until their horrifying brutal death they endure.
The meat-eating masses should seriously think about it for a minute, if they can stop stuffing their faces on the corpses of the poor souls.
( Rose Winfold )

We, the Dairy Industry, would like to thank you for still believing in the myth that animal milk is healthy and gives you strong bones.

When the Earth is ravaged and the animals are dying, a new tribe of people shall come unto the earth from many colours, classes, creeds and who by their actions and deeds shall make the earth green again.
They will be known as the Warriors of the Rainbow.
( Prophecy of the Native American Hopi people )

Perhaps the animal spirit is so great that one day it will inspire compassion in all human hearts.

A dog wags its tail with its heart.
( Martin Buxbaum )

A cat is a puzzle for which there is no solution.
( Hazel Nicholson )

Dogs come when they’re called.
Cats take a message and get back to you later.
( Mary Bly )

Sharks are beautiful animals, and if you’re lucky enough to see lots of them, that means that you’re in a healthy ocean.
You should be afraid if you are in the ocean and don’t see sharks.
( Sylvia Earle )

My dream is to have a house on the beach, even just a little shack somewhere so I can wake up, have coffee, look at dolphins, be quiet and breathe the air.
( Christina Applegate )

In the next 10 to 15 years, one of the things you are bound to hear is that animal protein is one of the most toxic nutrients of all that can be considered.
Risk for disease goes up dramatically when even a little protein is added to the diet.
( T. Colin Campbell )

If The Pig Collapses You Shove A Meat Hook Into His Cheek ..
Hogs get stressed out pretty easy.
If you prod them too much, they have heart attacks.
If you get a hog in the chute that’s had the shit prodded out of him and has a heart attack or refuses to move, you take a meat hook and hook it into his bunghole.
You try to do this by clipping the hipbone.
Then you drag him backwards.
You’re dragging these hogs alive, and a lot of times the meat hook rips out of the bunghole.
I’ve seen hams, thighs, completely ripped open.
I’ve also seen intestines come out.
If the hog collapses near the front of the chute, you shove the meat hook into his cheek and drag him forward.
( U.S. slaughter-house worker )

We don’t need to eat anyone who would run, swim, or fly away if he could.
( James Cromwell )

The only thing you will regret by going vegan is that you didn’t do it sooner.
( Ignatz Ziller )

When you donate money to the British Heart Foundation, you could fund cruel, pointless experiments on animals.
Shouldn’t your contribution help suffering, not cause it?
( Christopher Lee )

Thousands of children in the world die every day from hunger.
A small portion of the grain fed to animals to make ‘meat’ would save them.

The murderous insanity of the badger kill.
‘Cull’ is far too soft a word for what takes place – not in order to protect cows – who are butchered anyway, but in order to make more money for farmers.
( Morrissey )

Rod Stewart wearing a coat made from seals.
Have we found a reason other than Do You Think I’m Sexy to club him?
( Brian Reade )

Animals do talk.
Just not in our language.

Over half of the cattle were conscious when hoisted onto the rack.
So they are hanging conscious while bleeding out.
( Glenys Oogjes )

It’s deafening the sound heard on a farm when a newborn calf is separated from their mother.
Cows will call and look for their calf, and many of them will even stop eating.
They can spend two or three weeks just lowing day and night. It’s crazy.
( John Richards )

Animals don’t litter our parks and forests and open spaces with litter and garbage.
Humans do.
Humans need to start behaving like animals.

The way a person chooses to treat animals speaks volumes about their character.

When we go to the store to buy food, we don’t see animals.
We see nicely packaged food in plastic wrapping, in cans, in jars, and at the deli counter.
At some point, someone had to kill that animal for you.
And it was not a peaceful death, not at all.
( Shanti Urreta )

We shouldn’t stop consuming animal products just because of the obvious health risks.
We should stop because it’s cruel, evil, immoral, ignorant and unnecessary.

Yet saddest of all fates, surely, is to have lost that sense of the holiness of life altogether.
That we commit the blasphemy of bringing thousands of lives to a cruel and terrifying death or of making those lives a living death, and feel nothing.
( Rev. Dr. John Austin Baker )