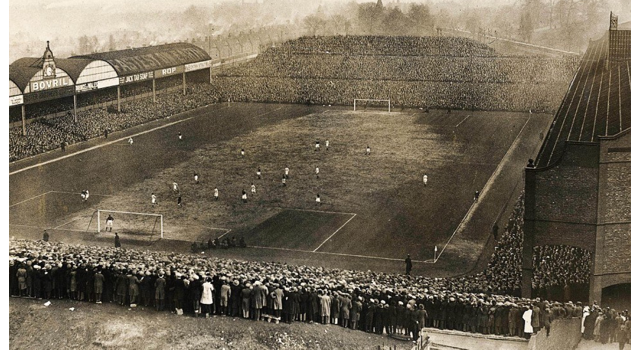 He’s sort of facing the goal with his chest.
( Lee Dixon )

It’s like a stone rolling down a hill.
It’s gathering more and more.
( Graeme Souness )

There was nothing wrong with his timing, he was just a bit late.
( Mark Bright )

Whoever you support, you’ve got that blood in your veins.
( Phil Neal )

He’s the player who can unlock the key.
( Stuart Robson )

Success is no accident.
It is hard work, perseverance, learning, studying, sacrifice and most of all, love of what you are doing or learning to do.
( Pele )

The proverbial is hitting the flan at the moment.
( Alvin Martin )

I spent a lot of money on booze, birds and fast cars.
The rest I just squandered.
( George Best )

The Star Of Berlin 1936 ..
The 1936 Olympic Village, on the western edge of Berlin, lies forlorn and forgotten.
Around 4,000 athletes – including Great Britain’s 208-strong squad – took part in the Games in the summer of 1936.
Adolf Hitler looked on with delight as his German ‘supermen’ lived up to his dreams of glory, winning the Games with a medal count of nearly 90.
Great Britain came tenth with just 14.
The only real slap in the face for the Fuhrer was the success of America’s black track-and-field athlete Jesse Owens.
He won four gold medals and was the star of the Games in the world’s eyes – even if Hitler regarded him as inferior because of his colour.
Ironically, Owens’s tiny room – No. 5, in block 39 – is the only athlete’s room that has been renovated.
It’s a simple space that reflects the modesty of the humble man who stayed there – a man who, paradoxically, enjoyed more freedom in Nazi Germany at that time than he did in his segregated US homeland.

In the FA Cup, you always have to expect the unexpectable.
( Roberto Di Matteo )

It’s six of one, half a dozen of the other at least.
( Stan Collymore )

He went in with his shuds stowing.
( Gary Neville )

I definitely want Brooklyn to be christened, but I don’t know into what religion yet.
( David Beckham )

He could have done one of three things.
He didn’t do either.
( Gordon Strachan )

There’s always been a fierce rivalry between Spurs and Tottenham.
( David Pleat )

Taking my son to see Aston Villa play for the first time this season was a wonderful moment for me.
And one that I hope he will treasure too.
( David Cameron )

The ball is like a woman, she loves to be caressed.
( Eric Cantona )

I know that some people have sought to perpetrate a myth that I am a naturally defensively-minded manager.
However, this is a case of certain people not letting the facts get in the way of a good story.
Having played in an Aberdeen team that got used to winning trophies regularly – including the European Cup Winners Cup – and having steered Rangers to seven trophies in three seasons, I can assure you that my appetite for attacking, winning football is second to none.
We all know that football is an unpredictable business but I would like to think that my time here as manager will be a long and rewarding one.
( Alex McLeish, Manager of Aston Villa F.C. )

England have players who can rattle anyone’s feathers.
( Michael Owen )

The game is not over until it is.
( Dwight Yorke )

When Gareth Bale opens his legs like that, it’s just a magnificent sight.
( Gary Neville )

We didn’t give them any opportunities, but unfortunately they took one.
( Neil Warnock )

His legs have gone and it’s time to hang them up.
( John Hartson )

It definitely would probably have been a penalty.
( Chris Waddle )

We want to win the match in 90 minutes, even if we have to go to extra time to do it.
( Alex McLeish )

Everyone is sitting on the fence on the edge of their seats.
( Alan Smith )

We have to reduce our expectations of England and we have the players to do it.
( Steve McClaren )

I call myself a 100 per center because every week I give 110 per cent.
( Bradley Johnson )

I’ve been consistent in patches this season.
( Theo Walcott )

It was goalposts for jumpers.
( Tony Mowbray )

It’s never over until somebody sings.
( Clayton Blackmore )

I’m a much better manager than when I started, but not half as good as I will be.
( John Gregory )

I would not be bothered if we lost every game as long as we won the league.
( Mark Viduka )