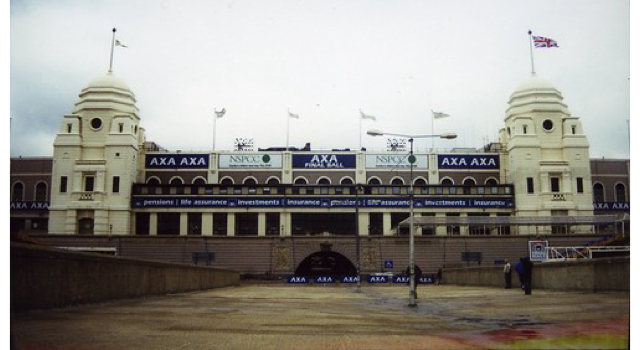 It’s just like a game of the mind, between me and the goalkeeper.
Me, I know how to control my mind.
When the keeper moves before me, it means that in this game of the mind he has lost.
( Mario Balotelli on taking a penalty )

Football’s a difficult business and aren’t they prima donnas.
But it’s a wonderful game.
( Queen Elizabeth )

Behind every kick of the ball there has to be a thought.
( Dennis Bergkamp )

If they are going to win this match, they’re going to have to score a goal.
( Jimmy Hill )

I couldn’t settle in Italy – it was like living in a foreign country.
( Ian Rush )

I won’t ever be going to a top-four club so I think we’ll just leave it at that.
It’s because I’m not called Allardici, just Allardyce.
( Sam Allardyce )

I think there is a bit of football snobbery goes on.
I have a philosophy that if you win more games than you lose you tend to get accepted.
I have to get a result by any fair means.
You have to find a formula to win the game.
All the best teams work hard, it is not a dirty word.
( Mick McCarthy )

Football is all very well a good game for rough girls, but not for delicate boys.
( Oscar Wilde )

In Latin America the border between soccer and politics is vague.
There is a long list of governments that have fallen or been overthrown after the defeat of the national team.
( Luis Suarez )

I’ve never wanted to leave.
I’m here for the rest of my life, and hopefully after that as well.
( Alan Shearer )

I need to know what makes them work and what doesn’t.
I can say that after a few days I know pretty much where 90% of my squad lives, who’s married and single, what they do and when they arrive in the mornings and their attitude towards working hard.
Take the football out of it.
if you’re in any management set-up in any company, it’s important you know your staff.
I’m going to guess that in any successful business, the employees or the players will follow the standard set by the management.
You need to treat a player as a person before you coach them.
Hopefully that’s one of my strong points.
( Dougie Freedman )

Every time I went away I was deceiving my mum.
I’d tell her I was going to school but I’d be out on the street playing football.
I always had a ball on my feet.
( Ronaldo )

Leeds is a great club and it’s been my home for years, even though I live in Middlesbrough.
( Jonathan Woodgate )

The rules of soccer are very simple, basically it is this:
If it moves, kick it.
If it doesn’t move, kick it until it does.
( Phil Woosnam )

My relationship with Mancini is really important.
He’s known me since I was young and he’s like a father to me.
I used to play with the young children at Inter Milan, so I know him very well and I can tell him anything.
I have to train hard every training session.
And give everything on the pitch.
You have four or five things that the manager asks you to do, then you have to play like you can play and give everything.
( Mario Balotelli )

Sometimes in football you have to score goals.
( Thierry Henry )

Sport In Schools Is So Important ..
I was lucky enough to carry the Olympic torch up in Birkenhead.
My little girl was there to watch, waving her Team GB scarf.
It was such a proud moment – she tells everyone that Mummy carried the torch.
Life has changed so much since I was growing up.
We used to play outside in the park until it was dark.
But now lots of kids are playing computer games and some parents are scared to let them out in the evenings.
With Scarlet, I want her to have fresh air.
I try to get her outside every day for a run around.
She’s got so much energy, as all kids do.
It’s only natural for children to want to run and get themselves out of breath.
We have to keep giving them the opportunity to do that and encourage it.
Sport in schools is so important because some families don’t have the chance to get their kids involved in those things.
( Melanie Chisholm )

I’ll give the ref the benefit of the doubt but he’s got a lot wrong.
( Mark Bright )

West Ham have committed 13 fouls, but they weren’t fouls, they were commitments.
( Ray Wilkins )

I think one of these teams could win this.
( Andy Townsend )

I loathed the game, and since I could see no pleasure or usefulness in it, it was very difficult for me to show courage at it.
Football, it seemed to me, is not really played for the pleasure of kicking a ball about, but is a species of fighting.
( George Orwell )

After watching the Olympics and the Paralympics, aren’t these overpaid footballers boring now?
( Paul Lowry )

He can’t kick with his left foot, he can’t head, he can’t tackle, and he doesn’t score many goals.
Apart from that he’s all right.
( George Best on David Beckham )

What problems do you have, apart from being blind, unemployed and a moron.
( John McEnroe to Wimbledon spectator )

I think I’ve found you a genius.
( Manchester United talent scout Bob Bishop’s telegram to the club on discovering
a 15-year-old George Best )

Manchester City will be kings of Europe.
But it might not be until I’m in charge.
( Jose Mourinho )

To say that these men paid their shillings to watch twenty-two hirelings kick a ball is merely to say that a violin is wood and catgut, that Hamlet is so much paper and ink.
( J.B. Priestley )

Joe Frazier is so ugly he should donate his face to the U.S. Bureau of Wildlife.
( Muhammad Ali )

The chairman of Brighton wouldn’t recognise Gareth Barry if he was stood on Brighton beach in the team strip, with a seagull on his head and a ball in his hand.
( John Gregory )

I took a whack on my left ankle, but something told me it was my right.
( Lee Hendrie )

You can’t be sure he will be taken on by a club anywhere.
Unless it’s some Outer Mongolian outfit that has been locked away from news, television and society for 10 years.
( The Nottingham Post on Stan Collymore, 1999 )

After those moving, mind-blowing, awe-inspiring Paralympics, I hope that the next Premier League footballer to fall over when he is not really hurt has the decency to die of embarrassment.
( Tony Parsons )

I wouldn’t say I was the best manager in the business but I was in the top one.
( Brian Clough )

If this can be termed the century of the common man, then soccer, of all sports, is surely his game.
In a world haunted by the hydrogen and napalm bomb, the football field is a place where sanity and hope are still left unmolested.
( Stanley Rous, 1952 )

The game has been tailored to the wine-bar fraternity.
The culture has gradually been eradicated.
( Nigel Kennedy, 1997 )

Why didn’t you just belt it?
( Barbara Southgate after her son Gareth missed that penalty in Euro 1996 )