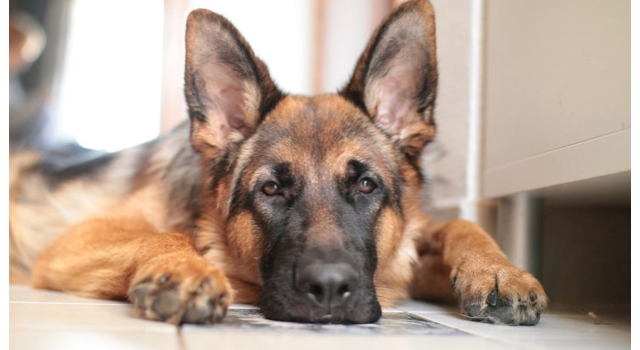 They Killed Her Dog ..
When widow Lynda Hill drew up her will, she left £100,000 to her favourite animal charity and expressed a hope that its staff would find a new home for her faithful dog, Henry.
But just hours after Mrs Hill’s body was discovered in her home, a vet from the charity recommended that the golden retriever be put down, and he was destroyed the following day.
Friends of Mrs Hill say she would have been devastated by the actions.
Police broke into Mrs Hill’s home in Peterborough after being contacted by worried neighbours who had not seen the 85-year-old walking Henry for several days.
Inside, they found the loyal retriever lying beside his owner’s body.
The police also discovered Mrs Hill’s will, which left nearly all her estate to the Wood Green Animal Shelter in Godmanchester, Cambridgeshire.
She also left Henry to the charity, adding, “I express the hope that they will look after him.”
After giving Henry food and water, a police officer played with the dog in the garden while waiting for staff from Wood Green to collect him.
But after examining Henry, a Wood Green vet said the dog – which had been without food, water and medication to treat his mild arthritis for up to five days – should be put down.
A legal expert said Mrs Hill’s will placed no legal burden on Wood Green because she was only ‘expressing a hope’ the dog would be looked after.
( Nick Craven )

Once you have had a wonderful dog, a life without one is a life diminished.

My goal in life is to become as wonderful as my dog thinks I am.

You may love your dog, but your dog will love you more.
There is no doubt that dogs show more love and compassion and concern than most humans.
A dog will be part of your life, but for your dog, you are its whole life.

The Thick Humans ..
We should talk a little less about devil dogs and a lot more about devil owners.. the thick human beings who use dogs as status symbols, burglar alarms and weapons.
We see the devil owners on every housing estate in the land.
We see them swaggering down the street, proud to have turned an animal into an offensive weapon.
It is time they were all put down.
Rather than obsessing about prosecuting the people who can’t prevent their dogs from killing children, we should be thinking a lot harder about how to prevent dogs killing children in the first place.
Dogs need what we call socialisation.
A learned skill that teaches them to mix with other dogs and humans without feeling fear or aggression.
Sticking a “Beware Of The Dog” sign on your front door does not and will never constitute responsible dog ownership.
The Dangerous Dog Act dwells too much on specific breeds and crossbreeds that are capable of extreme violence.
What we should concentrate on is the breed of human being who delights in owning an aggressive dog.
The breed of human who is simply too stupid to realise that every dog needs exercise to let off steam.
There should be a law against keeping dogs locked inside all day.
It is cruel, lazy and incredibly dangerous.
And if you don’t have the time to devote to caring for your dog, then get a budgie.
It is not good enough to keep dogs locked up inside, even if they were given the run of the house.
Nobody wants tougher dog laws more than those of us who love dogs.
Responsible dog owners are sickened by the dangerous pinheads who delight in owning an aggressive dog.
They soil the relationship between mankind and dogs that has endured for 10,000 years.
And nobody loves their dogs like the British.
( An extract from an article by Tony Parsons )

Every once in a while a dog enters your life and changes everything.

A dog is the only thing on earth that loves you more than you love yourself.
( Josh Billings )

A dog can show you more honest affection with a wag of his tail than a man can gather through a lifetime of handshakes.

A dog might destroy your shoes.
But will never break your heart.

If you don’t want dog hairs on your clothes.
Stay off the furniture.

When you feel like everyone in the world has deserted you.
You are never alone.
Your dog is still there for you.

If there are no dogs in heaven, then when I die I want to go where they went.
( Will Rogers )

A dog will teach you the meaning of devotion.
You will know a secret comfort and private peace.

Learn a lesson from your dog.
No matter what life brings you, kick some grass over that shit and move on.

My dog is my family.
I love him.
And I know that he loves me more.
I do not consider myself his owner.
I am his friend.
I am his guardian.

I Want To Sign Every Petition ..
I’ve always had a special bond with animals.
They were a constant presence in my life growing up.
My heart breaks when I see the horrific treatment of animals around the world.
I know a wonderful lady called Avis Lyons, who went to south-west India to set up the Animal Rescue Kerala sanctuary (ARK) and sold her house in Essex to cover the charity’s expenses.
Sadly, Avis has cancer now, so I want to do everything possible to make sure her legacy continues.
I want to do everything I can to stop animal abuse.
I’ve been to Romania, where I’ve been working with another incredible woman who runs a bear sanctuary and dog-rescue centre.
She has over 500 dogs, which is shocking.
I want to sign every petition going.
I think you can tell a lot about a person by how they interact with and treat animals.
( Alesha Dixon )

The best therapist has fur and four legs, your dog.

The greatest pleasure of a dog is that you may make a fool of yourself with him, and not only will he not scold you, but he will make a fool of himself, too.
( Samuel Butler )

If you pick up a starving dog and make him prosperous, he will not bite you.
This is the principle difference between a dog and a man.

We give dogs time we can spare, space we can spare and love we can spare.
In return, dogs give us their all.
It’s the best deal man has ever made.
( Margery Facklam )

If a dog will not come to you after having looked you in the face.
You should go home and examine your conscience.
( Woodrow Wilson )

My little dog.
A heart-beat at my feet.
( Edith Wharton )

No Animal Is More Full Of Love Than A Dog ..
There are a lot of drooling, snarling, dangerous animals sniffing around our parks and streets – and unfortunately many of them own dogs.
We have all seen the little men with their big dogs.
We have all witnessed the preening, pea-brained creeps brandishing their pets like lethal weapons.
There are no dogs – no matter how powerful – that are born wanting to rip off a child’s ear.
There are only fierce dogs that have been bred for violence, and then brutalised by morons who should not be allowed to own a stuffed toy, let alone a dog.
The dogs that have been brutalised by their owners are lost souls, animals that have been degraded to the status of weapons, and deserving of our pity.
They are dogs that have been raised in a sick world of aggression and cruelty.
A dog is not, by nature, a yob’s best friend.
No animal is more full of love than a dog.
No animal is more worthy of love.
The real problem is the dangerous idiots who own them.
That’s who we should be putting down.
( Tony Parsons )