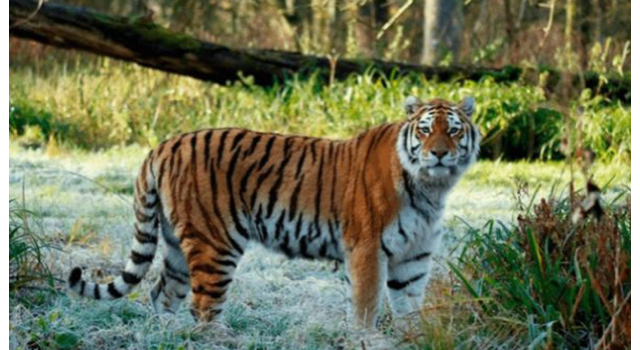 Orangutans Murdered For Palm Oil ..
In the last 20 years the number of orangutans, who live mainly in Borneo, have been halved – to 40,000 – as logging and the £5 billion palm oil industry have destroyed the forest.
Palm oil is used in biscuits, margarine, bread, crisps and chocolate and our craving for cheap food is devastating the orangutans’ habitat.
When the trees are felled the mothers are shot and the babies, who would stay with their mothers until they are eight, are sold or kept as pets.
When the babies are caught from the wild they are often very depressed.
The baby pets are often put in cages and fed human food such as rice, noodles and bread instead of the natural fruit diet they need.
Orangutans can live to 60 years old.
Unwittingly, we’ve all contributed to the orangutan crisis by buying products from the supermarket that contain palm oil.
Forests are being cleared to make way for its production and orangutans are paying with their homes, their freedom and their lives.

Please don’t claim you care about animals if you have them on your dinner plate.
( Rose Winfold )

Everyone claims to care about animals until you mention “farm” animals.
And then they try to excuse and justify why it’s okay to forcibly breed, enslave, abuse, terrify, torture and murder them.

The only hope animals have is for more people to stop eating them.

Tigers Die Slowly Of Neglect ..
A shabby, rundown park in Guilin, one of China’s main tourist cities, is home to the world’s biggest single collection of tigers.
Yet it is never included on foreigner’s tour itineraries.
For here, 1,500 captive tigers, around half as many as there are thought to be remaining in the wild, live out miserable lives in squalid conditions.
It’s against Chinese law to kill tigers.
Instead, it seems, they die slowly of neglect.
In row after row of foul, rusty cramped cages, tigers lie alone on filthy concrete floors, crippled and dying.
The reason is the tigers, mostly Siberian, are far more valuable dead than alive.
For a 55 pound pile of bones from a single tiger can be worth up to £225,000.
Dead tigers are driven 200 miles from the park, officially called the Xiongshen Tiger and Bear Mountain Village, to a huge subterranean complex where their fur is stripped from their carcasses and their bones collected to make tiger wine that can sell for £185 a bottle.
On paper, China has signed international wildlife treaties that ban all trade in tiger body parts and claims to have outlawed the industry.
In reality, Xiongshen and other parks like it, operate in a grey area of the law, using the bones of animals that have died naturally in captivity to produce ‘medicinal’ wine, apparently with the government’s blessing.
Tigers have been used in Chinese traditional medicine for centuries.
Their eyeballs are used to treat epilepsy, their bile to stop convulsions, their whiskers to sooth toothache and their penises as a potent sexual tonic.
The most valuable parts, however, are the bones, which are used to make wine that is said to cure rheumatism and arthritis, and prolong life.
Tiger bone wine, made by steeping tiger bones in huge vats of potent 38% proof rice wine, has for more than 2,000 years been one of the most expensive and sought-after Chinese traditional medicines, believed to bestow the tiger’s power and strength upon the taker.
The factory sells around 200,000 bottles a year and keeps up to 600 tiger skeletons at a time in huge vats.
China’s government has stubbornly resisted attempts to stop the illicit trade in tiger parts.
Jill Robinson, director of Animals Asia, has little doubt that the park has similar networks of sellers for other tiger parts, such as skins, teeth, eyeballs, whiskers and penises, all highly valued in Chinese traditional medicine.
Ms Robinson and other conservationists believe the fate of the tiger in china is sealed.
“By the next year of the tiger (2022), china will not have any wild tigers left”, she said.
“I wonder how proud the people involved in this trade will be when they have to explain to their children what happened to the wild tigers”.

Animals are not products –– Life doesn’t have a price.

The only animal that uses a weapon to kill other animals is the human animal, the coward among animals.
( Rose Winfold )

Dolphins Control Over Diabetes ..
Bottlenose dolphins could provide vital clues to help type 2 diabetes sufferers.
The mammals have an amazing ability to switch the condition on and off.
And if scientists can find out how they do it they could help prevent diabetes in people.
Dolphins and humans share the same glucose blood chemistry needed to feed our brains.
Dolphins are able to keep their blood glucose levels high in a diabetic-like state when they have no food to feed the demand from their brains.
When dolphins fast overnight they develop diabetes, then when they are fed in the morning they revert back to a non-diabetic state.
Effectively they have a switch which can turn diabetes on and off.
Discovering how dolphins control this may help humans turn diabetes off.
Their large brains need sugar to function like us.
We can eat carbohydrates but their diet of fish has no sugar in it.
Dolphins have a system which keeps blood sugar high in their bodies.
Their liver will go and produce sugar at just the right amount they need.
The number of diabetes sufferers in the UK is predicted to rise to four million in the next 15 years. It can lead to blindness, heart disease and kidney damage.

We all have the capacity to care, and kindness costs nothing.
But greed and selfishness is a mental disorder that afflicts many.

You ignorant, selfish, greedy people, and your sick desire to eat our dead flesh.
Are we not worthy of life and you think you are?
Is it because we can’t speak your fucking language?
We animals are more intelligent than the dumb psychos you employ to murder us in your barbaric, dark-age slaughterhouses.

What About The Sheep? ..
Time and again civilisations have thought themselves invincible.
They have trampled on the weak, the poor and the animals.
Civilisation has not really come very far at all.
We still think it acceptable to torment animals for our own amusement.
When we speak about climate change, we never seem to take animals into account.
Prince Charles has been prattling on about how wool is a natural, bio-degradable fabric and that we should all buy and wear more of it.
What about the welfare of the sheep?
Male lambs are slaughtered, ewes that have given up lamb after lamb for years are culled when deemed too old and unprofitable.
In Rome, a popular dish is the intestines of newborn lambs.
As the waters and temperatures rise, perhaps we will come to realise that we share this planet with animals.

I don’t understand why the majority of people support the cruel, evil shit we inflict on animals.
What the fuck is wrong with these people?

Why don’t people understand?
Animals are NOT your food.
Your food grows in the soil.

Before they are slaughtered, fear, pain and misery is all they knew.

For all the animals that suffer…
We are sorry that our love and our protests and our petitions is not enough to save you all from the greedy, the cruel, the selfish, and the ignorant people that are intent on doing you harm.

Mystery Disease Killing Bats ..
They may not be cute or cuddly, but we will certainly miss them if they go.
Bats are the hidden guardians of Britain’s ecosystems and scientists fear they might be in peril.
Our landscapes, crops, biodiversity and even potential for medical research into human diseases could be changed for ever.
A mystery disease is sweeping across North America, starving bats to death and leaving behind mass graves of thin, putrefied and fungus-ridden bodies.
The mysterious killer has been dubbed white nose syndrome (WNS) in America, where it was first discovered in a cave in New York State four years ago.
Once WNS hits a cave, its entire bat population – sometimes tens of thousands of bats – can die.
In Britain, our most common bat, the pipistrelle, can live in colonies of up to 1,000.
But in North America and, occasionally, Continental Europe, tens of thousands of bats can live in one ‘hibernaculum’.
The biggest known bat colony houses 24 million bats in Bracken Cave, Texas.
About one million bats have died since the North American epidemic started.
Reports of the fungus, thought to be cause of the disease, have surfaced in a handful of bats across Europe, although none has died.
Bats with white fungal growth on their noses have also been reported in Britain, although so far none has tested positive for the disease.
Professor Paul Racey at the University of Exeter, who is an advisor to the UK’s Bat Conservation Trust says: “Although the fungus (geomyces destructans) has been found in Europe, at this point we don’t have mass mortality.
We just have the fungus and we hope it stays that way”.

We live in a sick, twisted world where we torture and kill animals just to test cosmetics for vain humans.

Imagine being so evil and cruel that you believe it’s okay to kill newborn calves just so you can drink their mother’s milk.

If you want to live in a world where justice for animals comes before financial profit, going vegan is the only option.

Imagine a world where all animals are free from human cruelty, greed and ignorance.

The Murder Of Rhinos ..
Over two decades, poachers annihilated the black rhino population, killing them and hacking out their horns, which by weight are more valuable than gold.
Their numbers shrank by 96% from 20,000 to just 300 animals by the 1990s.
As a desperate last resort, those last remaining rhinos were put in sanctuaries such as at Lake Nakuru National Park in the Great Rift Valley, Kenya.
It’s proved to be a success, more than doubling their numbers to 635.
Kenya hopes to have 700 rhinos by the end of this year and 2,500 by 2035.
A new wave of poachers is being financed by international gangs because the Vietnamese wrongly believe that rhino horn can cure cancer.
Powdered rhino horn is fetching £31,000 a kilo – the same price as cocaine.
Poachers, who slaughtered 330 rhino in South Africa last year, have cashed in on rocketing demand in Asia, where rhino horn is sold as a miracle cancer cure.
Mark Jones, of Care for the Wild International, said killings had trebled and were now threatening conservation programmes.
Reports of horns sawn off come in almost daily.
Poachers and rangers are in shoot-outs, with deaths on both sides.

All animals have is their life, and we don’t even allow them to have that.

Why are so many people blind to the suffering of animals?

We all have something the animals never had… A CHOICE.

When you do your utmost to exclude animal products from your diet and everyday life, that is an expression of caring and kindness, a commitment to non-violence, and a belief in rights and justice for all.

MAY LIFE TREAT YOU THE WAY YOU TREAT ANIMALS.